People would like to see more in order to know more, but we are aware of the limitation of our sense of sight and that, due to how our eyes are constructed, we are not able to, for example, see in the dark or from much distance ‘ these are beyond abilities of a human eye.

Mankind has always wanted to extend these abilities. We constructed telescopes to see further, night vision devices ‘ to see in the dark, and thermovision ‘ to check what‘s under the surface and see the world in different colours. If you associate thermovision mostly with hunting, check what other fields it is used in and maybe you will find something useful.

A thermal imaging camera in a smartphone ‘ how to get it?

THERMAL IMAGING MINICAM IN A SMARTPHONE AND FOR THE OUTDOORS?

Under the influence of such cult films like ‘The Blair Witch Project‘ human imagination in a dark forest fills with terrifying visions and we frantically start to look for something to dispel the surrounding darkness, but is a flashlight the best solution here?

Imagine being curled up in a tent in the middle of a forest and suddenly you hear disturbing noises. You don‘t know if someone or something is deliberately coming toward you or accidentally just coming by. Maybe it‘s just the wind in branches? You take out your flashlight, turn it on and‘ in this second give your position away to the intruder that may not have noticed you otherwise. 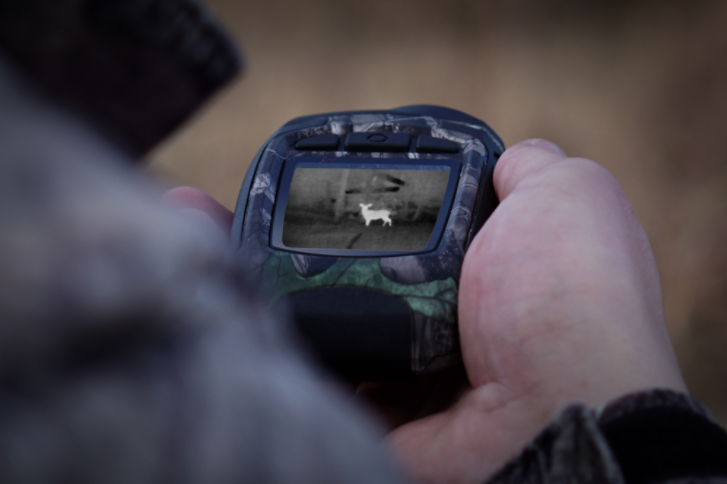 It is true that, if confronted with a forest witch, a thermal imaging camera or a pocket thermovision device would not protect you, but in a dark forest it would detect a wild animal or a human nearby without giving away your location.

With such device you can see a potential danger even in a range of a few hundred metres, without revealing your location. Thanks to the palette of 7 colour filters in a thermal imaging camera for a smartphone you can choose the most appropriate thermal visualisation to current conditions that the best exposes elements of the surroundings having a different temperature. 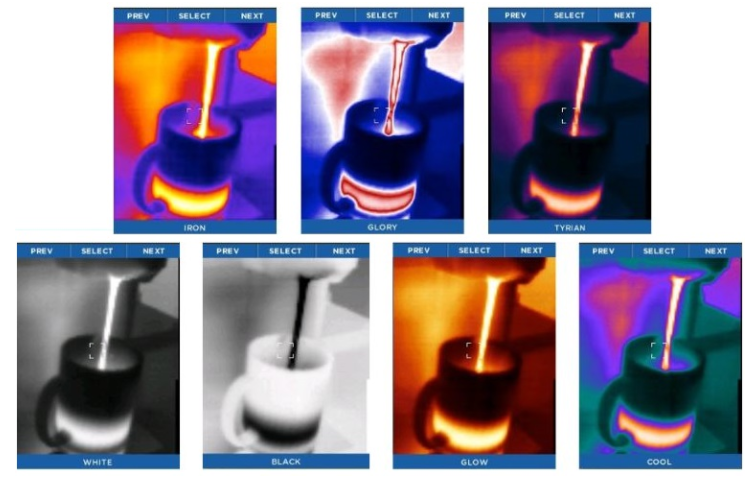 Dr Dolittle would be thrilled upon seeing this equipment, though he could in fact just ask an animal what‘s the problem. Thermal imaging smartphone minicam can be used by an amateur observing animals in their natural habitat but also in veterinary science and animal training.

The thermal imaging smartphone camera Seek Thermal Compact XR used for thermal diagnostics of, e.g. horses, allows for comparing thermal state of hooves to check for lameness, localising inflamed tissues, joints and tendons, observing muscles regeneration after training, checking teeth or detecting spinal conditions and even respiratory system diseases. Thanks to a thermal imaging camera designed for a smartphone, choosing the most suitable saddle would be easier as the thermogram shows how the saddle presses against a horse‘s back. 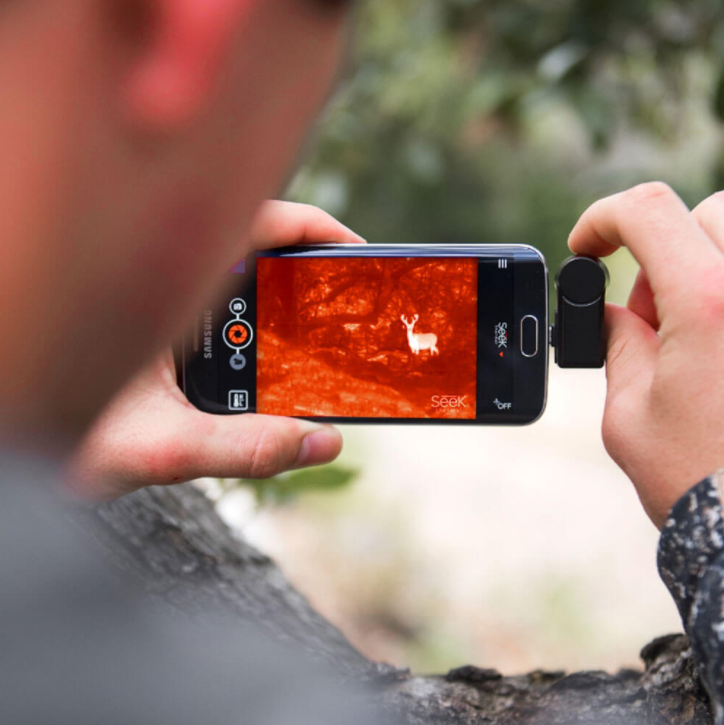 How to change a smartphone into a thermal imaging camera? Get Seek Thermal Compact XR for smartphones with Android or iOS. Source: Thermal.com

A thermal imaging camera for a smartphone with Android or iOS can be a tool for uinvasive animal examination ‘ comfortable both for the operator (no necessity to actually stand next to the animal what may result in injury) and for the animal, as it‘s less stressful.

With the thermal imaging camera for Android or iOS for examining farm animals you can take better care of their health and prevent losses in productions, e.g. when mastitis in dairy cattle is recognised early enough.

Thanks to a thermal imaging camera for camping you can thoroughly check the surroundings of your tent. Source: Seek Thermal Facebook

When going for camping take with you a thermal imaging smartphone camera or the compact thermal imaging camera Seek Reveal XR FastFrame with faster imaging speeds. Then you can check what lurks in the dark.

This device has a frame rate greater than 15 frames per second what allows for observing fast moving animals, so you check whether you‘re safe in a given location and also if the fire is extinguished for sure.

Thermal imaging smartphone camera is pocket-sized as it is powered by a phone, so remember to also take a power bank with you.

Humidity in rooms is difficult to detect and may cause health problems that won‘t be cured with medicines if the real reason for bad well-being is still hidden in the walls, above the ceiling or under the floor. Not detected and quickly removed rising damp starts to mildew and causes mould on the walls.

Thanks to a thermal imaging smartphone camera you can detect the damp spots early enough to prevent from getting mould on the walls that is harmful to respiratory and immunological systems and also damages the building itself.

The sooner you detect it, using for example the pocket thermal imaging camera Seek Thermal for a smartphone, the lower the costs of removal will be.

LOSS OF HEAT OR COLD? THERMAL IMAGING MINICAM FOR BUILDING INSPECTION HELPS TO FIND THE REASON

The reason for heat loss, ventilation and air-conditioning problems is escaping air. The only way to check weather insulation is all right is to look through walls. Heat also escapes through not tight windows and doors, so they best thing you can do is have a look at them through the thermal imaging minicam for a smartphone Seek Thermal Compact FF. 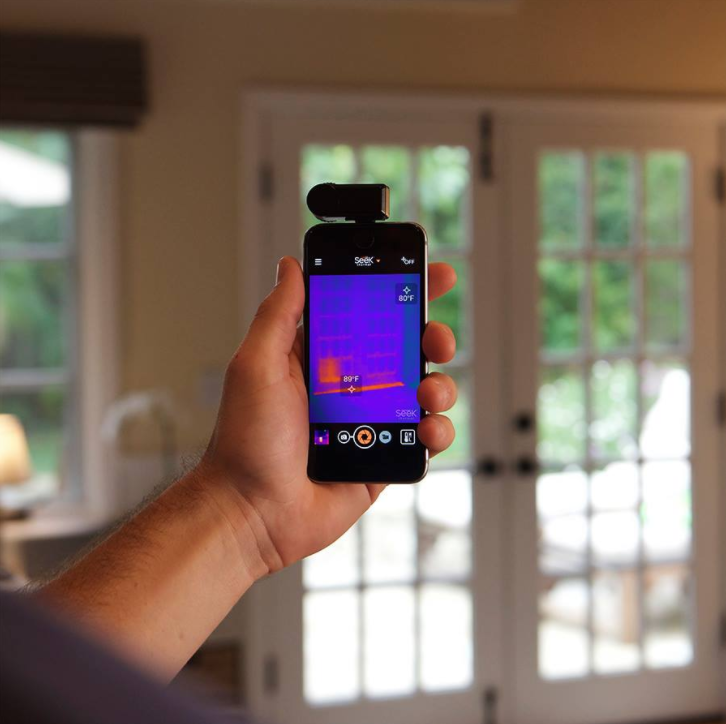 Thermal bridges are places in a building construction with lower thermal resistance, so the heat escapes through them more easily.

With a thermal imaging camera you can examine roof beams, walls, ceilings, key corners of rooms and check differences between floors.

Although the underfloor heating is on, is it still cold in your house? Instead of a warm blanket, take a thermal imaging camera to examine your heating system.

A thermal imaging camera for a smartphone detects all alarming places, checks whether the underfloor heating is faulty and also if a traditional heating system is working correctly.

Since we are on the topic of examining pipes, in this way you can also detect clogged or broken pipes, even in the plumbing system.

A thermal imaging camera can show you which pipe is clogged. Source: Seek Thermal Facebook

With your bare eye you are not able to detect which device generates too high temperature. If the thief from ‘Home Alone‘ had a thermal imaging camera with him, he probably wouldn‘t have touched a hot door knob with his bare hand‘

The thermal imaging minicam for a smartphone Seek Thermal Compact FF can be used for a preliminary inspection of overheated elements of devices and also flaws in installations, so that any failure can be prevented in time.

It allows for detecting devices consuming much energy in your house and finding out whether your installation needs fixing.

When it comes to burglars, imagine that you do not have to leave your house with a flashlight to light your premises and check if there‘s anybody out there. You simply connect a thermal imaging camera to your smartphone, stay in the dark (what gives you an advantage over the opponent) and see a potential intruder.

Are you wondering how your house would look at night through a thermal imaging smartphone camera? Like‘ set on fire! 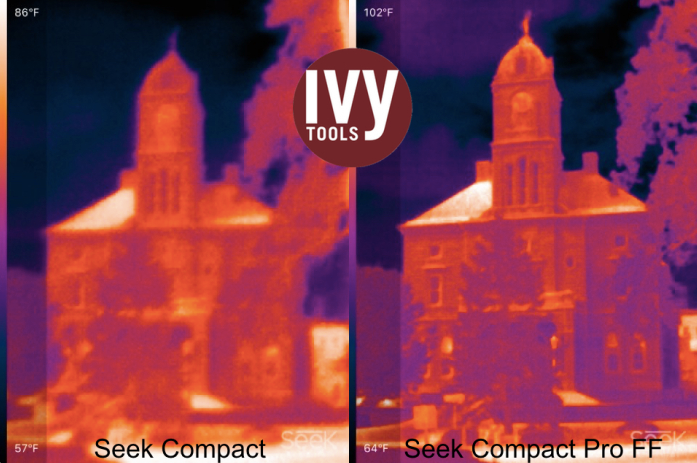 This is how a thermal imaging camera sees a building ‘ as if it is burning‘ Source: Seek Thermal Facebook