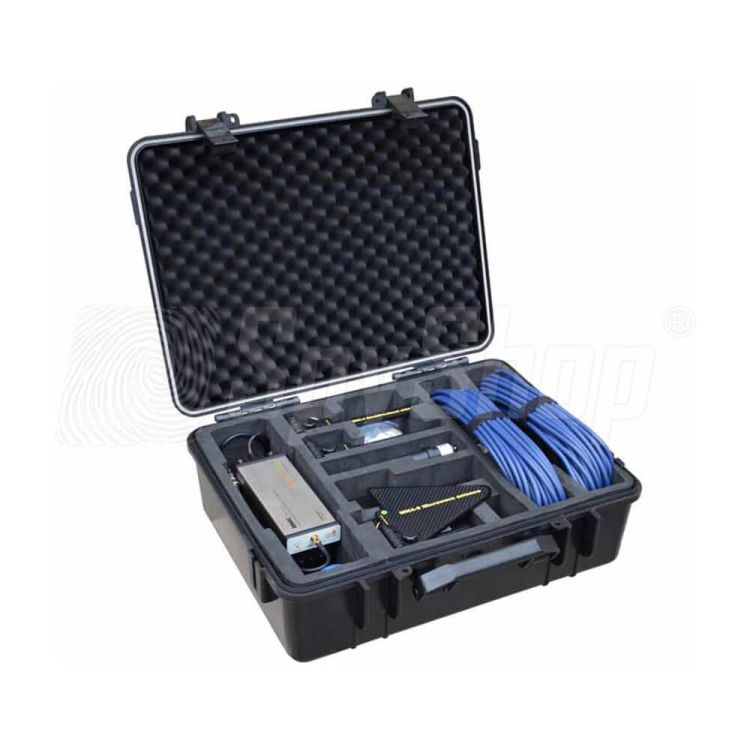 Delta X 100 is an upgraded version of the device Delta 4G/12G, well-known among state uniformed services and in the detective branch, that detects devices intended for obtaining classified information unlawfully. The new version is faster, more sensitive and much more accurate.

Delta X 100 applies technology that enables to analyse band spectrum. The digital receiver, compared to standard RF scanners, allows to obtain complete information on all the radio transmissions present within the searched area with no need to move the equipment, which might be difficult. Band scanning speed in version X 100 4/12G, compared to the previous Delta 4/12G has been increased by 50 MHz to amount 100 MHz, so the scanning time has been reduced by half.

The use of two antennas allows to detect all kinds of spy equipment regardless of the applied method of transmission coding and modulating. The main principle of operation of the system detecting e.g. radio wiretapping is its capability to distinguish strengths of electromagnetic waves that depend on the source of the sound, which means that if the radio signal is transmitted close to the antenna the stronger the signal is, and of course, the farther the distance of signal transmission, the weaker signal is received. This way it is possible to determine position of the spy device.

System for detecting spy devices, besides detecting radio transmissions, will also be able to detect GSM, 3G, LTE, Bluetooth, WiFi and other signals of that kind as well as audio-video devices operating both in continuous and intermittent modes.

The Countersurveillance system Delta X 100 together with the compatible software is a tool used by the detective branch professionals as well as by the national defence services. The device has an intuitive user-friendly interface and does not require the operator to have any expert knowledge and the provided information is sufficient to detect and locate a wiretap or a camera. The operator gains access to advanced information and statistics needed for subsequent analysis.