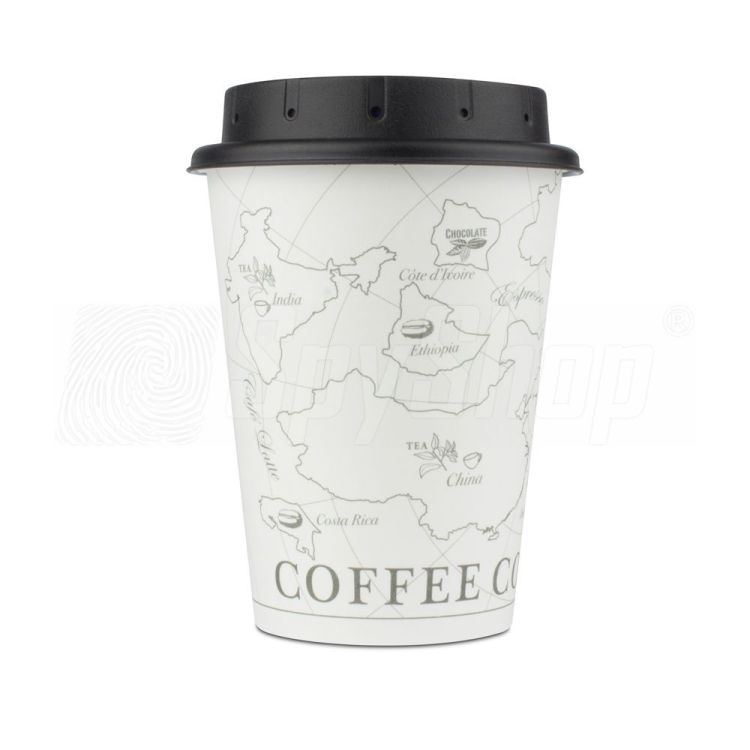 PV-CC10 is a revolutionary way of discreet recording of video matrials. The hedden spy camera's lens and video recorder are concealed in a disposable coffee cup cap, much like those commonly seen in coffee shops or petrol stations.

The hidden spy camera PV-CC10 fits most regular disposable cups (3 fitting cups included), which allows to perform easy and discreet video and sound recording. The recorder utilises a CMOS image sensor able to record video in 1280×720 or 640×480 resolution at 30 FPS.

Recordings are saved to replaceable memory cards with maximum capacity up to 32GB, which allows to store 11 or 20 hours of video respectively. Additionally, the recordings can be stamped with current date and time, which makes their use later on much easier. LawMate PV-CC10 hidden spy camera saves files in MOV format, which can be easily viewed on any computer. Operation of the coffee cup camera is simple and intuitive – switches allow to change recording resolution, while a single button triggers recording. The recorder is powererd by a built-in Li-Ion battery, which allows continuous work for as long as 2.5 hours.

Hidden spy camera Lawmate PV-CC10 in a coffee cup
By Alejandro A.
4

Comment : durable battery as for this kind of concealed cam, you can use different coffee cups as needed
Report abuse

Comment : plus for design and another one for the idea itself. Present cutting edge spying technology is just astounding,!!!!
Report abuse

Comment : this hidden spy camera totally deserves a highest note of five stars from me/. There's no way it can be seen, the coffee cup looks innocently, re4cordgins are stamped with date and time, card slot is available. I can only praise it!
Report abuse

Hidden spy camera Lawmate PV-CC10 in a coffee cup
By Austin A.
5

Comment : greatly hidden cam, only you shouldn't have real coffee in it… But you can always have it with you or put on a desk anywhere. That's what I do and I'am sure I won't be caught :)
Report abuse