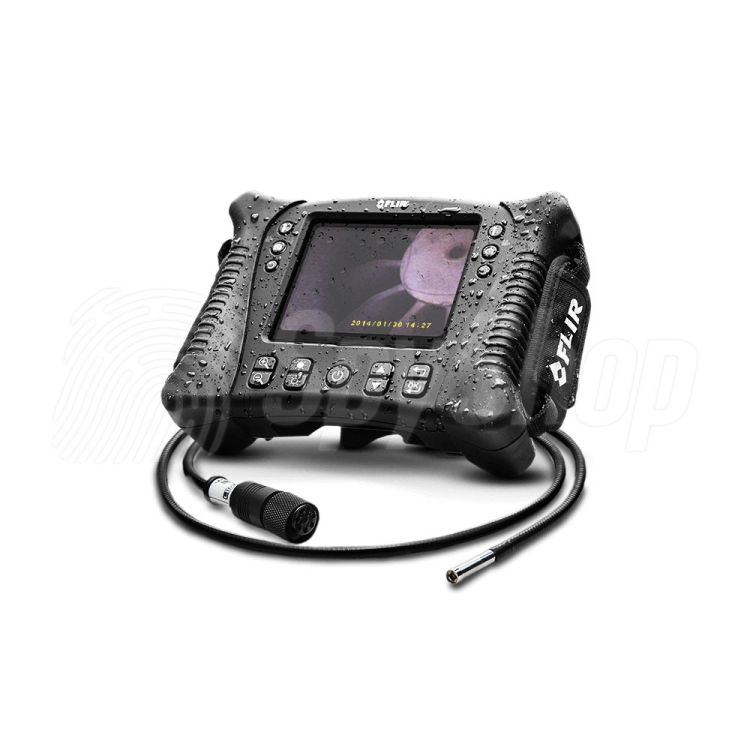 Flir VS70 is a professional tool which enables inspection of hard-to-reach places. A set of optional cameras such as wide angle or with a long range of view, as well as with adjustable angle boom, allow you to look into every corner.

Flir VS70 is an advanced device which enables the operator, with the use of optional cameras (micro cameras, long-range cameras and wide angle cameras) to view what is covered by obstacles that significantly limit access to the object. The device features 5.7" screen with the resolution o 640×480,which provides real-time view.

It is shockproof and resistant to dirt and water.

The Flir VS70 control unit has been protected by the rubber, tight coating which protects electronic components against water, dirt, dust and falling from a height of up to 2 m,,enabling operation of the device in any type of area and in any weather conditions, and the long operation time of the rechargeable battery allows for a whole-day inspection without charging batteries.

A major advantage of the Flir VS70 is possibility to exchange the inspection camera with another type of the camera, as the needs of the users are different. Operator can choose between two- and four-link articulated cameras, that can be operated wirelessly. Multiple-link articulated cameras allow to change the camera viewing angle by 90° or 180°..

Inspection camera FLIR VS70 functionality enables adding voice memos, which can later, during footage verification, be used for detailed explanation of a problem or a scope of work to the client or the partner if there was no possibility to take handwritten notes earlier.

Flir VS70 is a professional solution for conducting inspection in hard-to-reach places. Flir inspection camera offers a range of advanced functions and accessories which enable adjusting the camera to the specific operation conditions.

FLIR Systems, Inc. Is a brand which has been present on the market since 1978. It is considered a world leader in designing, producing and selling thermovision devices of wide scope of use. The constant development of the company and widening the scope of its projects resulted in...

Borescope camera Coantec C40 with a probe resistant to liquids, greases and oils

Endoscope camera VideoScope Laserliner Plus with 9mm lens and 1,5 ZOOM for inspection...