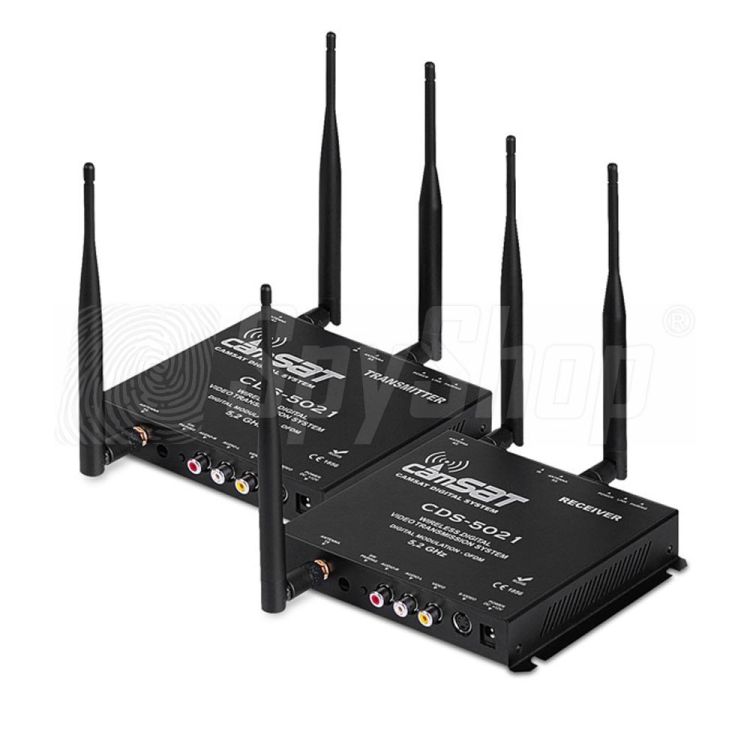 CAMSAT CDS-5021 STR is a version of kit CDS-5021 expanded with additional functions. The kit was designed for objects requiring the large amount of audio-video transmission signal in one object.

Camsat CDS-5021 STR is the extended version of a kit of CDS-5021 designed for wireless transmission of audio-video signals . One of its features is the ability to transmit both point-to-point and point-to-multipoint (eg. Live transmission of mobile vehicles). One-way transmission is characterized by much lower mutual interference, allowing the cooperation of several devices in the space of a single object .

Radioline CDS-5021 STR for digital audio/video transmission has a function of manual setting of the operation channel, what is helpful when many objects are simultaneously applied in one object. The (DFS) frequency may be switched to automatic mode any time. In case of the absence of link for a long time the Watchdog is responsible for the restart of the device.

Radioline CDC-5021 STR is designed for institutions, in which video transmission between the rooms plays a key role. Automatic and manual mode of setting the operation frequency allows for undisturbed audio-video transmission, whereas QoS mechanism is responsible for its highest quality.

CAMSAT is a leading manufacturer of wireless systems for the video transmission and any data in the 5 GHz radio band. Inassortment offers a wide range of products starting with the analog systems IP systems. Their mai advantage is a wide range to satisfy the need for the most demanding...