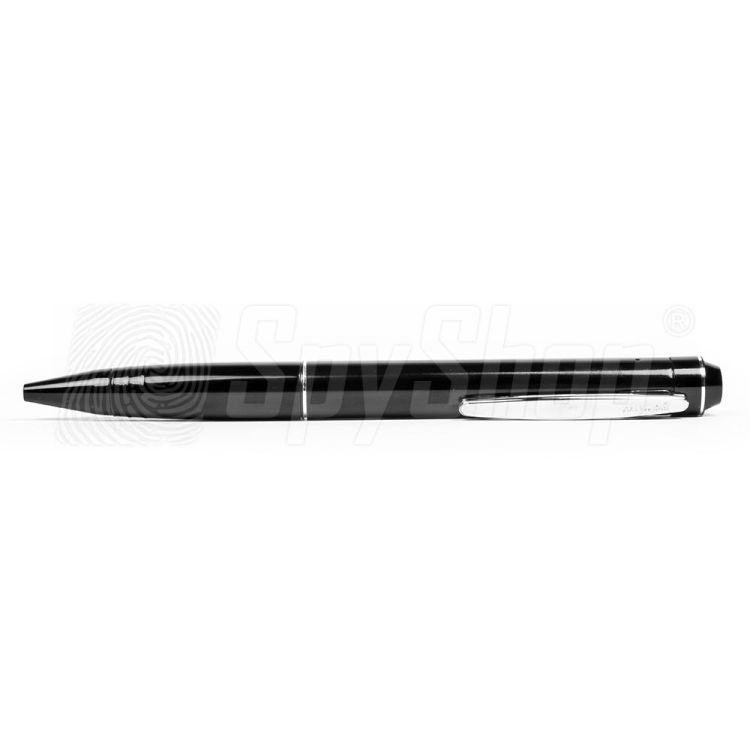 MQ-77 spy pen is a very discreet voice recorder. It has a memory capacity of 256 MB and a simplified operation system that makes the device easy to install without any additional software. The recorder is hidden in the pens housing and its construction allows you to write it like any ordinary pen.

MQ-77 spy pen is very simple in operation - to start or stop recording just move the pens clip. Additionally, the device is capable of operating in sound activated mode. This function conserves memory of the device and also helps to analyse the recordings - the microphone collects only sounds of a sufficiently high intensity, so moments of silence are not recorded. MQ-77 comes with a 256 MB memory. Three levels of audio quality allow you to record from 8 up to 33 hours. A built-in battery lasts for 12 hours of continuous operation. An included remote control and headset allow you to easily control the device and listen to recordings directly from the spy pen's memory.

Comment : Very clever camouflage but the device itself is rather basic, not much memory and operation time could be longer
Report abuse

Comment : can be operated from a distance so no need to manipulate with it what may aroise suspicions. Simply put it on your desk or next to you at a meeting and use the remote when needed
Report abuse

Comment : I hesitated for a while if to go for the MQ-77 pen or VR-CA02 calculator (best solutions for an office environment I think) but eventually I got the pen. Quite straight forward and well camouflaged
Report abuse

Comment : I hesitated for a while if to go for the MQ-77 pen or VR-CA02 calculator (best solutions for an office environment I think) but eventually I got the pen. Quite straight forward and well camouflaged
Report abuse

Comment : At the beginning I was a bit reluctant to use this recorder during any meetings, because I thought everybody will notice that something is wrong but the pen is so discreet that it is impossible to spot the recording function. Now I use it at every business meeting I go to because you never know what and when may be said.
Report abuse

Comment : Best £100 spent in my life I suppose, just a shame about the circumstances I had to use this pen…
Report abuse

Comment : It's an interesting idea, a voice recorder hidden in a pen. It doesn't arouse any suspicion. MQ-77 is very simple to use from distance - remote control is small and discreet.
Report abuse