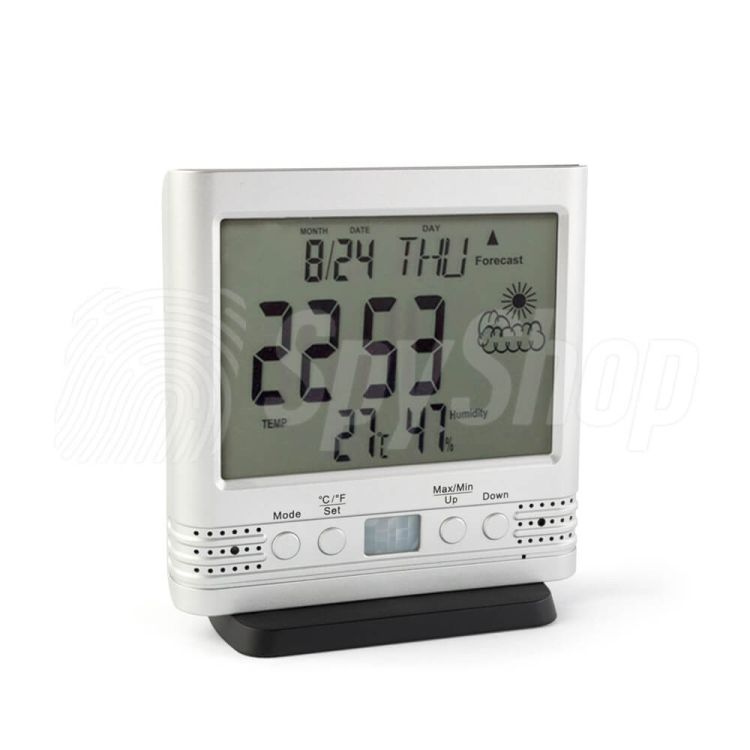 The PIR spy camera PV- TM10 is a perfectly designed device of the highest class camouflaged in a multifunctional watch with advanced options.

In addition to its hidden purpose, the device displays time, ambient temperature and weather forecast. The Pir spy camera was made of high quality materials and modules, which ensure stable and reliable operation. Advanced CMOS sensor enables recording video in two resolutions at 30 frames per second: VGA 640 × 480 or HD 1280 × 720.

The PIR motion sensor is a crucial element of the design. In contrast to a traditional camera motion sensor it reacts to heat change in their environment . Such a solution is widely used in anti-theft systems or when automatic trigger of light or ventilation is used. Precision and energy efficiency of PIR sensor contribute to efficient operation of the watch and prolong the life of the battery. The device can operate in two modes - video recording or picture taking. Video and audio recording starts after detection of change in temperature. It lasts from 5 seconds to 2 minutes depending on whether the movement in the room is still detected or not. In photo mode 3 consecutive photos are generated.

All information collected by the Pir spy camera is saved to a removable microSD card ( cards up to 16GB are supported) and then can be downloaded and played back on your computer (data exchange via a card reader or a USB interface). The built-in rechargeable lithium-ion battery allows continuous recording for about 5 hours and the standby mode extends the operation of the recorder up to 6 days! This will allow you to leave the device without having to monitor its operation and frequent charging. Additionally, a wall mount bracket and a stand for placing the watch on a desk or a cupboard are included in the set. In an easy way you can place the recorder in the most optimal spot to precisely define the camera's field of vision.

The pir spy camera PV- TM10 is an excellent solution for monitoring inside and outside of buildings. It allows controlling of what is going on in the office, room or in front of the entrance to an apartment. It has also additional functions which indicate time and weather conditions.

Comment : I'd like to state my opinion by writing that this Pir spy camera is an excellent and super discreet device for home monitoring. We have it in our living room and check what our teenage children are doing when we're at work
Report abuse

Pir spy camera PV-TM10FHD hidden in multifunctional clock with thermometer
By Brayden B.
5

Comment : Has all we need and some extra functions. Quality is prime.
Report abuse

Comment : If you've hired a nanny I recommned to check on her from time to time using this spy camera to know that your children are looked after in a friendly environment.
Report abuse

Pir spy camera PV-TM10FHD hidden in multifunctional clock with thermometer
By Gabriel A.
5

Comment : in a few weeks I need to go back to work and leave my baby with a stranger :/ So we invested in this multifunctional clock with hidden camera - to keep our finger on the pulse. It's not the cheapest but we Do not economise on our children and their well-being!
Report abuse

Comment : To be honest I was a bit disappointed but had no problems with returning it, doing business with detective store is hassle free.
Report abuse

Pir spy camera PV-TM10FHD hidden in multifunctional clock with thermometer
By A. T.
4

Comment : Has maaany useful functions, can stand or be put on a wall
Report abuse