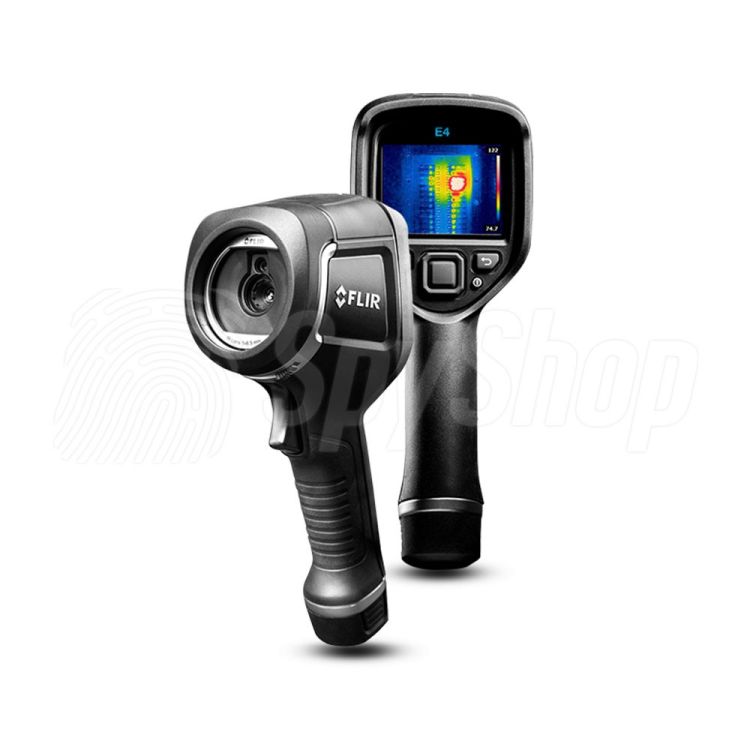 The Flir EX series cameras are portable devices intended to collect information on the temperature distribution on the surface of the observed object. Infrared cameras have been used in a wide range of industries starting from the mechanical engineering through energy audits, ending with locating moisture in a room.

The infrared cameras by Flir - the world leader in scope of thermal measurements - feature e.g. a well-thought-out and modern design, practicality, simple and intuitive handling, as well as quick reaction in a wide range of temperatures.

Flix EX thermal imagers series have been developed in 4 versions i.e. E4, E5, E6 and E8, which have different sensitivity, image resolution and operating modes. The thermal imager is very handy, its grip and power supply resembles a solid screw-driver; the camera is equipped with a removable accumulative battery located in its handgrip. The most important part of the device is its matrix consisting of uncooled microbolometer detectors which converts the visible image to a temperature distribution displayed on a 3" touchscreen. Precise interpretation is possible through 3 different colour palettes (black and white, iron, rainbow), and the MSX function (Multi-Spectral Dynamic Imaging), which overlaps the digital image on the thermal image, enables even more accurate thermal analysis of a building, electrical installation and diagnostics of mechanical systems. The built-in memory of the thermal imager has a store capacity of up to 500 sets of images, which can easily be copied via the USB port to a computer.

The most common applications of the Flir EX series thermal imagers:

FLIR Systems, Inc. Is a brand which has been present on the market since 1978. It is considered a world leader in designing, producing and selling thermovision devices of wide scope of use. The constant development of the company and widening the scope of its projects resulted in...