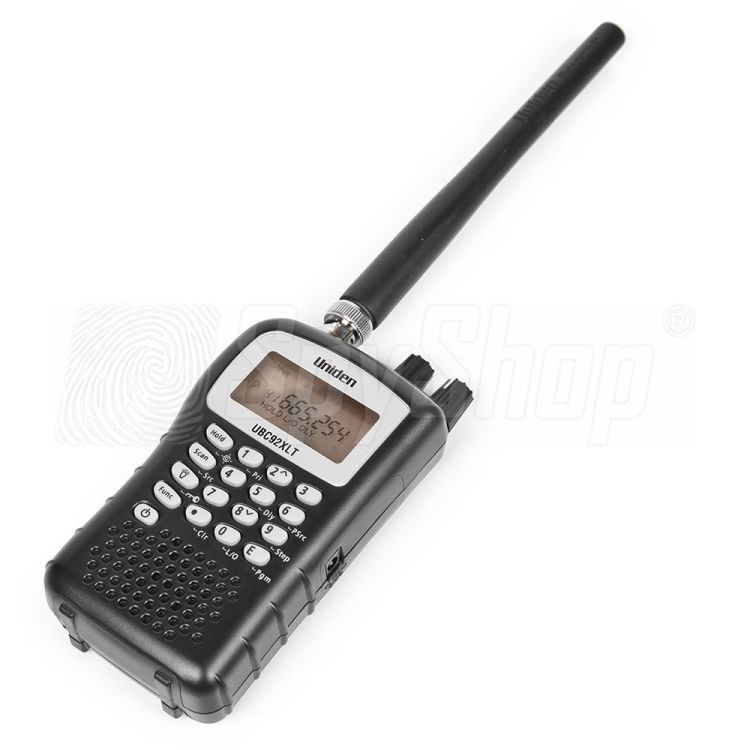 UBC-92XLT is another device produced by one of the best and most appreciated companies from this field – UNIDEN. It is used to scan the radio band in search for transmissions and wiretaps.

The Uniden UBC-92XLT scanner is a device of wide scope of usage and many facilities. It has an operation range of several kilometers; however, it may be reduced due to bad weather conditions or high-density housing. The Uniden UBC92XLT allows to intercept radio programs, short-wave transmitters and uncoded police and aircraft signals or weather transmissions in an easy way. Additionally, the CloseCall function allows to listen-in to the strongest signals emitted in the neighbourhood. The Uniden UBC92XLT is incredibly fast – it searches as much as several dozens of channels per second!. Storing the data about intercepted frequencies and administrating them is very intuitive – 10 memory banks allow to segregate 200 frequencies in total. Additionally, the device protects the saved data from erasing even after emergency switching off due to interruption in power supply. The power supply may be provided from the power pack or AA batteries. The batteries may be quickly replaced when discharged.

An essential new feature of the Uniden UBC-92XLT model is the ability to remove the interference from other frequencies which affect the reception of the preferred signal. Triple-conversion circuit increases the quality of listening-in and sharpness of the generated sound. The scanner was also equipped with headphone input, which allows for not only real time transmission listening-in, but also to connect a voice recorder and archive the recordings on microSD memory cards.

Uniden UBC-92XLT scanner is recommended not only to radio fans but also to person who look for a great quality, multi-function and intuitive receiver for wiretap transmitters available in our shop.

Additional assets of the Uniden UBS-92XLT

Uniden is a Japanese brand founded in 1966 in Tokio . Development-orientation, constant widening of the business activity range and high class of its products resulted in growing group of followers all over the world, especially in the USA, Europe and Australia. Uniden is one of...

The customer has rated the product but has not posted a review, or the review is pending moderation

Comment : check out its additional features if you still hesitate
Report abuse

Comment : I was afraid that there was a bug installed in my house or office. I couldn't sleep and was afraid of saying anything. I didnt know what to do. When searching for a solution I found the Detective Store and their expert listened to me and explained that actually I am not defenceless. I invested in this Uniden scanner, checked the premises and my anxiety was gone. I still do a test from time to time and get a clear answer if there is a listening bug hidden somewhere.
Report abuse

Comment : I use it to search for wiretaps (not found any yet but you need to stay vigilant!)
Report abuse