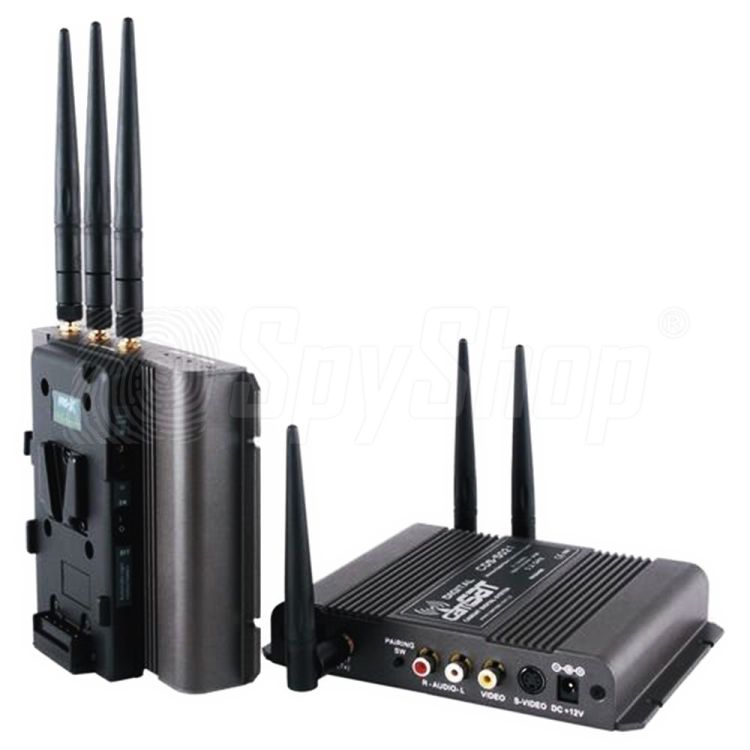 Camsat CDS-5021TV is a digital audio/video encrypted transmission wireless video sender. It ensures safe signal transmission in field operation. It is widely used by operators and to cameras installed in cars because of small size, light weight and stable connection.

Camsat provides PAL system video transmission in 720x576 resolution, at 25 frames per second. The transmission is protected by encryption based on AES 128bit algorithm which guranatees full protection against interception and using the signal by third parties. The transmission of the signal is based on a modern OFDM modulation technology (Orthogonal Frequency-Division Multiplexing). Its modus operandi is sending the data in many streams simultaneously – it guarantees stable operation of the system, efficient use of the band and low sensitivity for transmission errors. Thanks to this technology, the transmission delay at video transmission in full resolution is maximum 400ms, which is an extraordinary result. The signal may be transmitted inside the building through walls and between floors for a distance of even 100m without having the antennae within the field of vision (depending on type of buildings and transmission conditions). It is also possible to use additional antenna and obtain separate ambient transmission antennae of double receiving aspect, which receive the signal from the opposite directions. The operation of the CDS-5021TV is fully automated, the user do not need to choose the frequencies manually, because the system analyzes the available channels in 5,2 GHz band automatically and is ready to operate within 30 seconds from the initiation.

What are the distinctive features of the Wireless video sender CAMSAT CDS-5021TV for encoded transmission?

CAMSAT is a leading manufacturer of wireless systems for the video transmission and any data in the 5 GHz radio band. Inassortment offers a wide range of products starting with the analog systems IP systems. Their mai advantage is a wide range to satisfy the need for the most demanding...