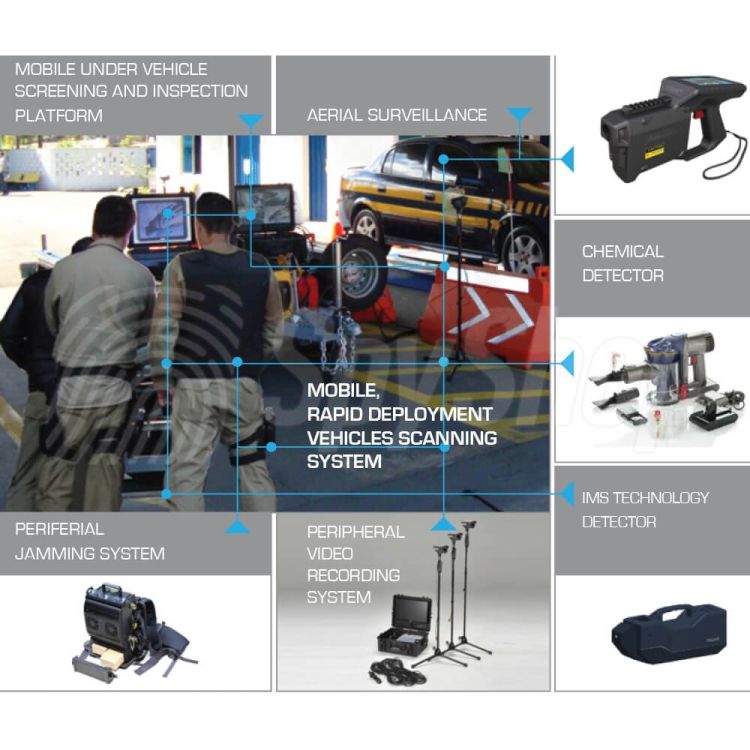 WSTP is a set of systems for controlling all kinds of vehicles for threat detection, which enables quick mobilization of security forces and effective detection of smuggled hazardous or unauthorized substances.

WSTP is a vehicle control system that integrates all mechanisms and techniques of detecting explosives, drugs and other illegal and hazardous substances instantly. The systems have been developed for effective identification of presence of explosives and drugs on textiles, vehicles and people. The vehicle control system can include car chassis recording cameras, cameras for identifying a driver, external scanner searching for chemical substances and devices that require biometrical authorisation.

In addition to detection of explosives and drugs, WSTP also provides tools to support and supplement checks at roadblocks (entrances to guarded areas), such as mobile systems which are able to detect objects under vehicles, 360-degree ground and air surveillance, as well as jammers of explosive devices (IED), in order to protect deployed forces.

WSTP vehicle control system used in hand-held, manual devices and supported by the central control and communication unit enables quick sharing of intelligence data bases making it possible for the security forces to track new threats and analyse terrorist attacks or crimes on the basis of information obtained by intelligence agencies.

The great advantage is that control stations are mounted in just a few minutes. They are capable of intercepting explosive devices or their components, providing law enforcement with a high level of detection.

Detector of hazardous liquids in containers - SecurSCAN AT1000